Millennial challenge: what real estate agents need to know about this generation of digital consumers

The Millennial generation covers individuals born between 1980 and 2000 who are aged between 16 and 36 years old today and represent the majority of the workforce in countries such the United States.

Millennials are seen as being distinct from previous generations such as Generation X or the so-called baby boomers, not least in their relationship with the real estate market: the Millennial lifestyle does not involve buying a home, contrary to the behaviour of earlier generations, for whom buying a flat or house was never in question.

In order to approach these digital consumers, reluctant a priori to buy a home, realtors should dig deeper into the reasons behind this attitude.

Why don’t Millennials consider buying a home a priority?

Among the abundant literature available on why Millennials do not seem particularly interested in buying a house, certain factors crop up repeatedly:

The longer period of time required to establish a career, a stable relationship and subsequently the delayed decision to have children all impact on the decision to buy a home. For example, in 1968, 56% of U.S. citizens aged between 18 and 31 years were married and had their own homes. Today that percentage is only 23%, according to a study by the Pew Research Center.

The crisis hit Millennials while they were tackling high, long-term costs. According to the aforementioned Bank of America study, 27% of the Millennials say they feel "anxious" regarding the managing of their finances, and 30% claim that their biggest economic stress is spending more than they should.

Although it is debatable, some feel that Millennials have greater aversion to commitment compared to their parents or grandparents’ generation, making it much more difficult to make such a binding decision such as the signing of a mortgage.

4. Differing cultural view of the value of owning a home

Another big difference – and some deem it as the most important one - is that Millennials have a very different perception of the real estate market and the cultural value of property, and rank it far lower than their main priority: real experiences. Two recent studies by Bauer and Eventbrite, in the United Kingdom and United States respectively, show very similar results in this respect: in the first, 71% of Millennials prefer to share with people something they have made and not something they possess. The second study determined that 78% prefer to spend money on an event or experience rather than acquiring something.

5. Differing economic view of the value of owning a home

The financial crisis has served to refute an argument that has been widely accepted for decades: that home ownership is a risk-free investment because a property’s value will always increase. Faced with the reality that real estate can be as volatile a market as any other, Millennials act accordingly when opting to purchase or rent a property.

Among Millennials there is a trend towards geographical mobility, dictated by difficulty finding a job that matches their expectations and allows them to develop professionally and personally. This trend was lower in countries like Spain, where there was virtually no young people moving abroad to find work opportunities before the financial crisis. But now that mobility has become a trend even in Spain, it adds to the number of reasons why Millennials do not want to commit to living in the same place for a lifetime.

Being a generation of digital natives immersed in the digital economy makes the Millennials a type of consumer who typically makes purchases only after carrying out thorough online searches. This means that their decision-making takes much longer and subsequently delays any action regarding when and under what circumstances one should acquire a place to live.

The peculiarities of the Spanish Millennial

Although a characteristic of the Millennial generation is similar behavioral traits across different cultures and countries, making it a far much more homogeneous collective of people than previous generations, Millennials are not short of local features.

Regarding their approach to the purchasing of a home, Spanish Millennials are still in part attached to the cult of property that has characterized the country throughout the twentieth century. Spain has traditionally been a country of homeowners and although new generations are renting at record highs, the vision of home ownership as an investment for the future still prevails.

This is clearly shown by recent INE (Spanish National Institute of Statistics) figures, according to which 78% of the population are homeowners with the European average at 70%. The difference is even greater if attention is paid to specific neighboring countries: in Germany, for example, only 52.5% of the population owns their home. It cannot be ignored that more and more people in Spain are inclined to rent, and that in just 15 years this figure has risen from 9.6% to 15.4%.

What can realtors do to approach Millennial consumers?

Apart from the differing perception in value that the Millennial generation may have regarding the purchase of an apartment, rising rental prices in Spain will see them facing a conundrum: what should they do if their monthly rent becomes the same amount as monthly mortgage payment?

In order to offer them the best possible service, the real estate sector must modernize itself from within to attract the Millennials with which, to date, it has not managed to attract. The scope of the housing market is still very traditional, and the new generation no longer tolerates, for example, starting a sale by cold calling, or making a purchase without first checking feedback by other customers, or receiving an impersonal service that cannot be accessed via their mobile phones, to name just a few examples.

One of the processes in which real estate can begin offering a service tailored to the Millennial generation is in the signing of documents, a much needed step when buying a home that continues to take place in its analog form. The digitization of the signature not only streamlines the formalization of any transactions and/or procedures, but also shows a company to be more modern and technology-savvy.

If you wish to know more about how to digitize the application process and signatures for real estate purchases, please download the following whitepaper for free. 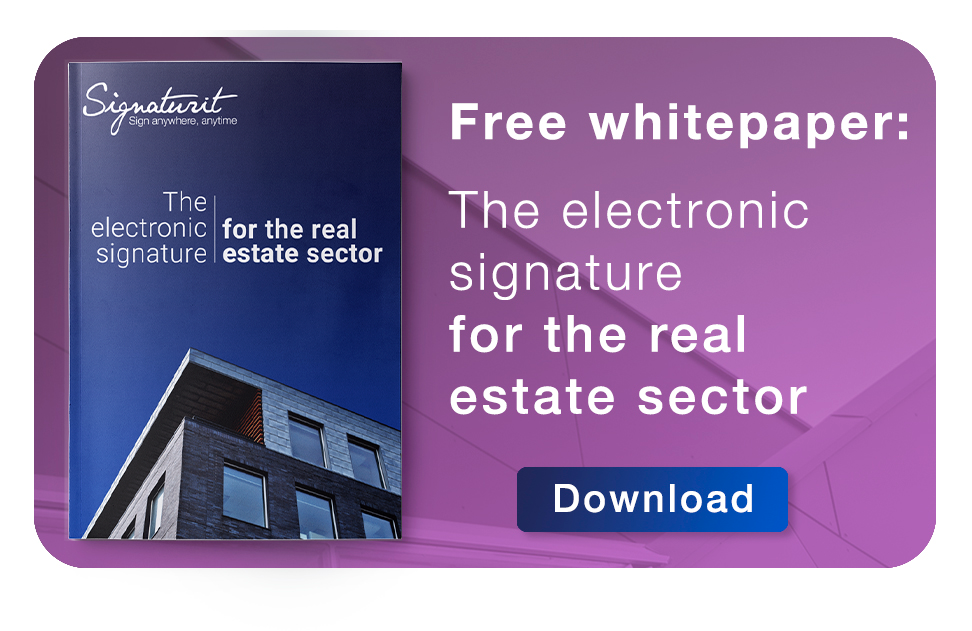