The latest edition of Mobile World Congress concluded on February 25th and has officially broken new records. In 2016, the Gran Vía exhibition space brought together 101,000 delegates – 6% more than last year  – and 2,200 exhibitors, while complimentary event 4YFN for entrepreneurs attracted 12,500 attendees and 500 members of the technology community and startup scene.

This edition was Signaturit’s second consecutive appearance at MWC, giving us yet another golden opportunity to present our advanced electronic signature solution to new audiences as well as demonstrate its smooth incorporation onto mobile devices. Our participation at the event this year was also twofold: as well as having a stand at MWC at the Catalan Pavilion, we held a workshop at 4YFN on Monday 22nd February and hosted a stand there the following day.

After four intense days and several more spent reviewing all the conversations about electronic signatures that took place, we have compiled highlights of our time at the 2016 Mobile World Congress.

An intense (and diverse) commercial experience

The opportunity to bring together the sales teams from our offices in Barcelona and Amsterdam allowed us to carry out more than 200 live demonstrations of our advanced electronic signature solution and organize more than 40 meetings, not only with potential clients but also with investors and entities with whom we hope to formalize alliances in the near future.

In this edition of MWC, the diversity of our partners has far surpassed that of 2015. Besides collaborating with software integrators, companies developing apps or security experts, this year we have managed to establish relationships with companies belonging to ICT and the telecommunications industry, as well as those with a background in financial services and various government bodies.

The nationalities of our visitors were again very diverse. Although obviously weighted toward Europe as the continent is the focus of our current business plan - France, UK, Sweden, Netherlands, Germany...- we also had the chance to talk to companies from various Latin American countries, as well as ones from Israel, the United States, South Africa and South Korea. 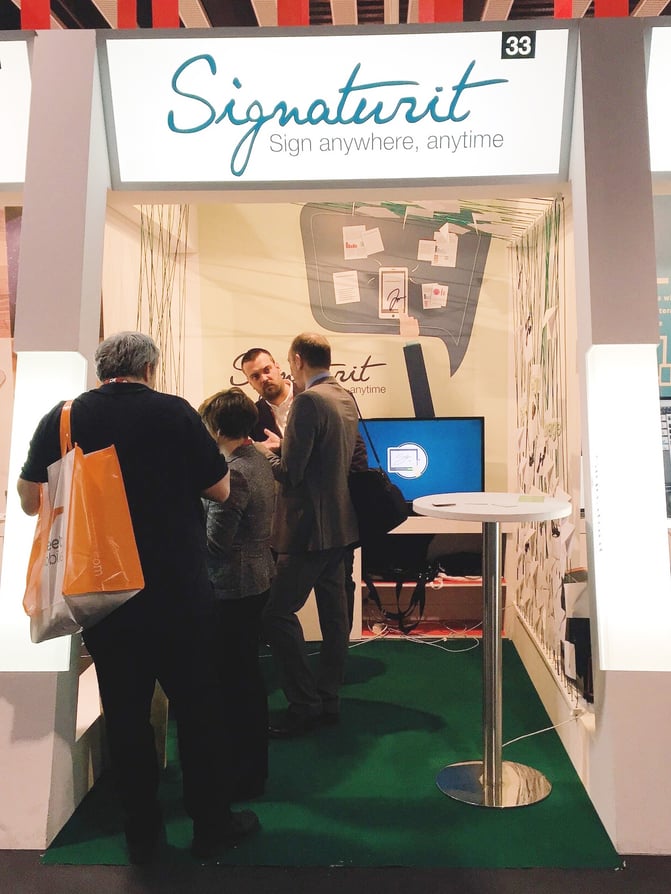 The common thread of the meetings was the growing need to digitize the signing and contract management processes in all types of companies and organizations, which, thanks to our electronic signature solution, can easily take place in full compliance with current legislation, especially as it has the added advantage of using the cloud.

Our 4YFN workshop was also very well received and greatly enriched by over 25 audience questions, which have been compiled in this post.

As in 2015, our booth was located in the very central location of Congress Square, making it into an essential stop for the many VIP guests visiting the fair. We therefore had the opportunity to present our eSignature to ACCIÓ representatives and Barcelona’s Chamber of Commerce, among others.

Finally, our presence at Mobile World Congress put us on the radar of numerous media outlets, including local television channel BTV who interviewed our CMO and co-founder, Salvador Severich.

We would like to say a huge thank you to ACCIÓ – the Catalan governmental agency and initiative of the Department of Enterprise and Employment to foster commercial competitiveness at a local level - for selecting Signaturit to be one of the representatives of all Barcelona-based technology companies.

If you did not had the chance to attend the 2016 Mobile World Congress and would like to know first-hand how our electronic signature solution works, you can do so right now by registering for a free 14-day trial.